How did we finally get there? Plan D, of course: Hired a Driver.

September 15, 2018 - Today was my best day yet. We left with our driver, Billy, around 10:30 am in a CAR! The drive to Newton Stewart through the Galloway Forest was beautiful and I was happy to be away from pavement and buildings for a few hours. 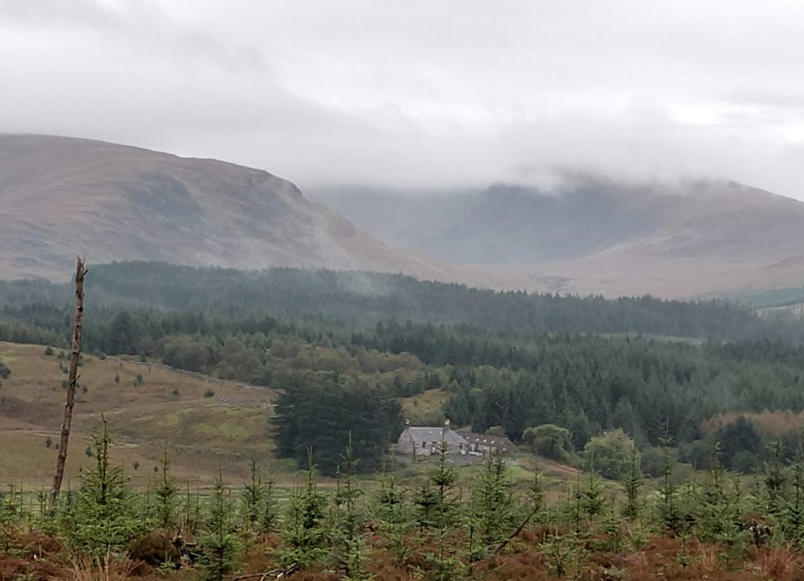 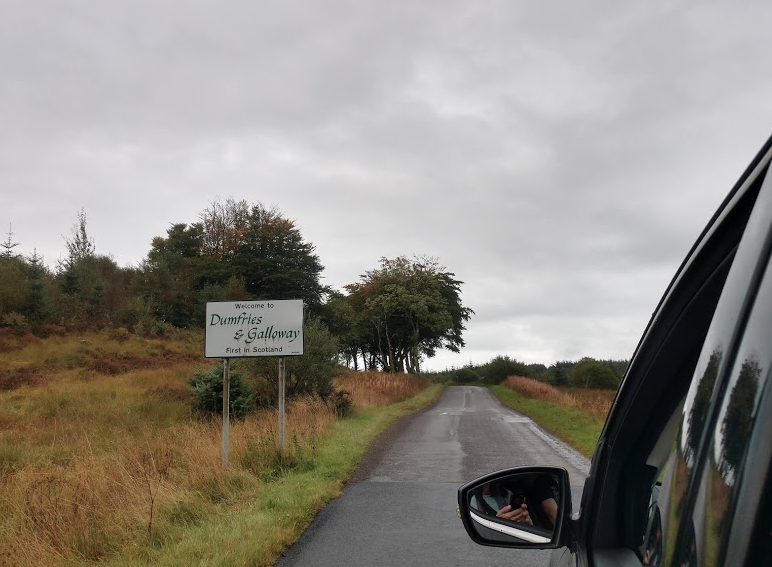 When we got to Newton Stewart we went straight to The Museum, which is housed in an old church, complete with a locked tower reached by a spiral staircase. We were taken up into the tower to look for pictures, which was really cool. There was a painting of the Gorbals, a settlement along the river, which is a likely area for the Stroyans to have lived. 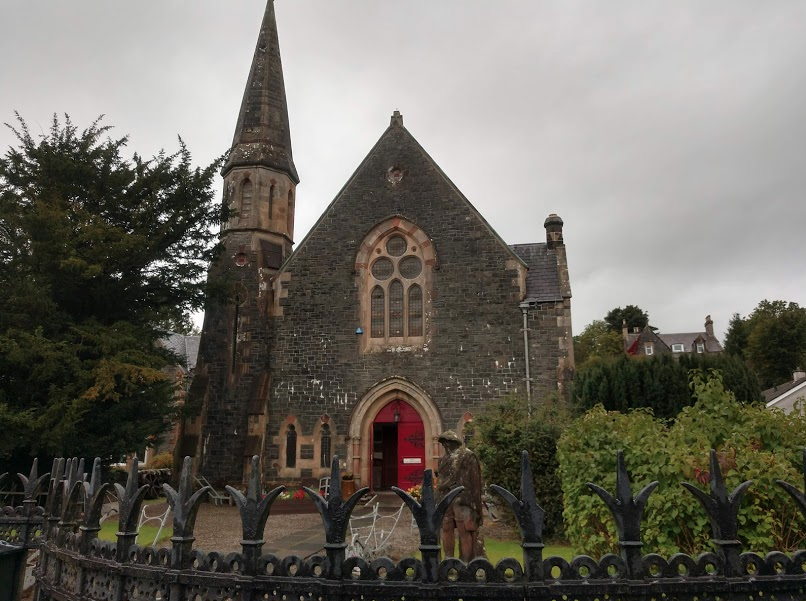 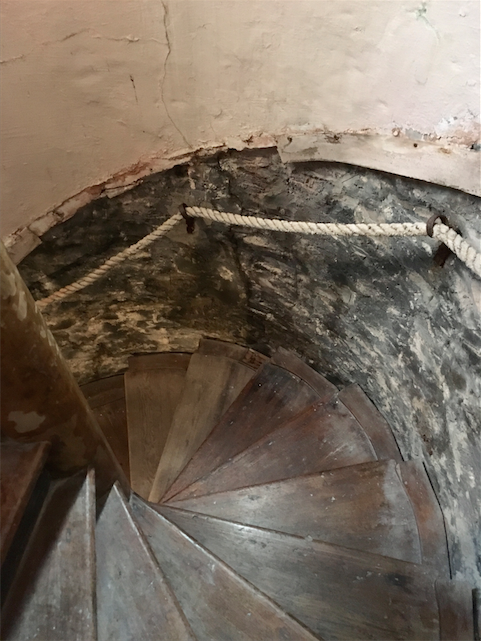 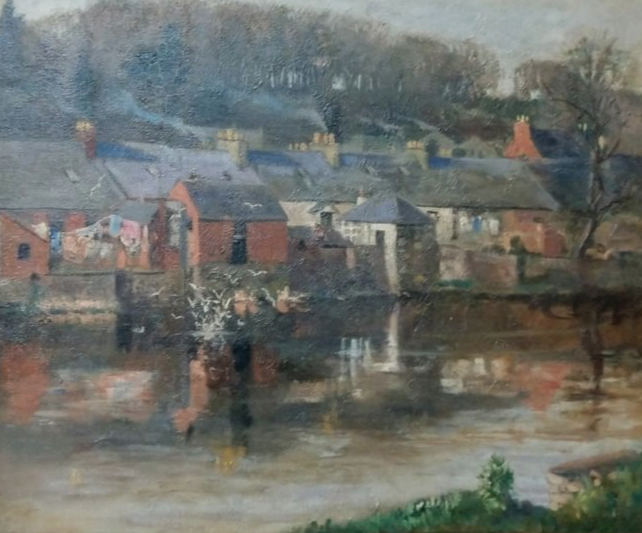 Newton Stewart is one of those hidden gems unstructured travel reveals. Tucked away at the southern end of the Galloway Forest, it is about three hours by car from Glasgow or Edinburgh, delightfully uncluttered, and peaceful with kind and helpful locals. It is where Isabella Stroyan Laurie was born and lived until coming to America.

It is a lovely town, and to an American remarkably, blessedly, old. Along the high street, (every town has a "high street", used the way we Americans use "main street"), many of the houses and shops are in buildings that Isabella Stroyan may have walked past many times while growing up.

“This picturesque and friendly market town was founded in the mid 17th century by William Stewart, youngest son of the 2nd Earl of Galloway. The "New Town of Stewart" was granted Burgh status by charter from King Charles II, allowing a weekly market and two annual fairs to be held…It was on a pilgrimage to the shrine of St. Ninian at Whithorn, in 1329, that Robert the Bruce forded the river where the present handsome Cree Bridge stands. The area is richly populated by castles, monuments, earthworks and archaeological sites.” (http://www.newtonstewart.org/)

Our driver, Billy, drove us through the town to The Museum at Newton Stewart. I was giddy with happiness to have reached this place I’d spent so much time planning and waiting to enter, in hopes of finding some revelation about the Stroyans and Lauries. I’m completely obsessed by now, having spent the better part of most evenings for months prior to the trip planning routes and cataloging research questions and pouring over vintage photos so I would recognize our family if some museum had them on the wall.

The Museum itself is in a beautiful old church, formerly St. John’s Church, and it was founded in the late 1970’s by a local woman named Helen Drew (https://sites.google.com/site/newtonstewartmuseum/about/helen-drew).

The Museum displays begin before you are in the door. At the gate is a sign declaring the museum OPEN. The path to the door takes you past sculpture, vintage plows, a bench to rest on, a stone wall graced with bright flower beds, and an iconic red telephone booth. Bright red and inviting, the door into the vestibule is open and a sign invites you to PLEASE ENTER through it. 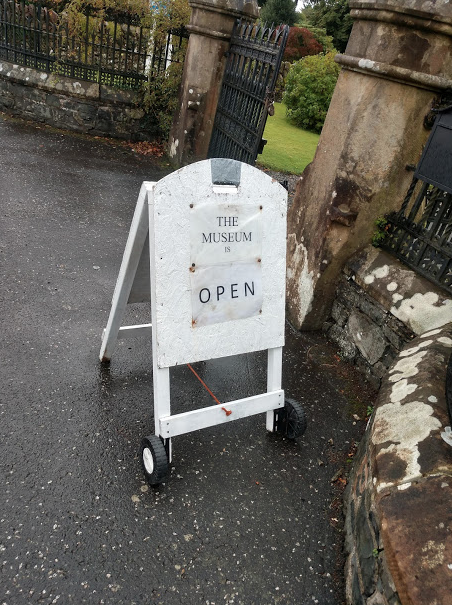 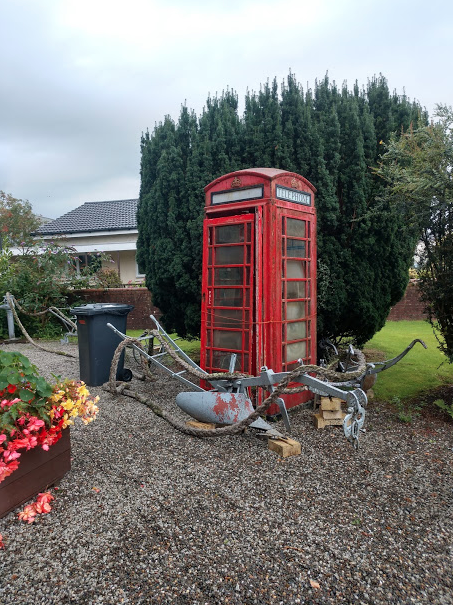 We entered into what was once the sanctuary - a large, bright, open room with aisles on either side lined with exhibits. The large front desk sits to your left as you enter, and on the wall are two giant chalkboards with the names of 19th century school rosters. Sitting at the desk with a warm smile of welcome was Michelle Mitchenson, a volunteer we would soon see had the knowledge and passion that our own Tina Larson possesses.

We explained our self-imposed task of finding stories and information about John Laurie and his wife, Isabella Stroyan Laurie. Our notebooks contained the dates and facts required to get started, but holes in the information was part of why we had come. Michelle invited us to look around the museum while she did a little digging.

The early settlers in Hamilton County, Nebraska we now call the Scotch Colony, brought with them a set of skills and knowledge of farming, tools, dressmaking, cooking - those things that make the human world go round. They didn’t discover these skills, they learned them in Scotland and brought them here.

The immigration of this group has everything to do with how our county developed and prospered. They became our culture and heritage. And even though my own Hamilton County ancestors were not part of the Scotch immigration, they were still the friends and community who lived, worked, raised families, and shared recipes with my family. So I looked, in this not so little museum in Newton Stewart, Scotland, for the connection. The similar story. The ties that bind us, one to another. Here’s a few: tools, dolls, dresses and a dentist chair! 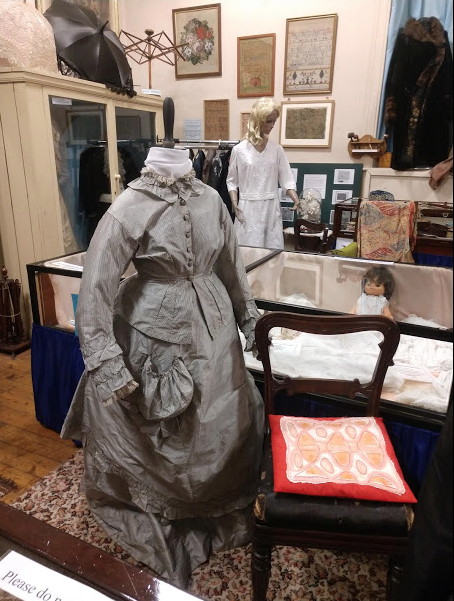 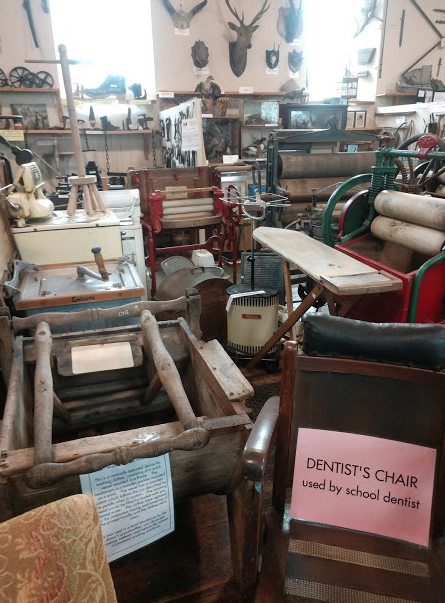 Plainsman Museum (click photo to go to slideshow and enlarge) 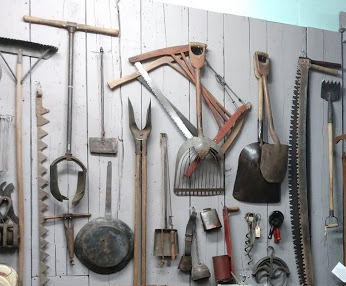 Here’s something I thought I had no connection to at all, other than the joy they bring when played by the ever charming Sean Connery wearing a kilt. Until I read the story of Wullie Marr.

Wullie Marr played these pipes in France all through World War 1. From The Royal Scots Fusiliers to the Highland Light Infantry (HLI), to the Somme in 1916 and Kemmel Hill in 1918, Wullie and his two brothers, Thomas and Robert served in this pivotal European conflict. They were totally unarmed, yet courageously led Scottish troops onto the battlefield. Of the 165 pipers and drummers who served with the HLI, only 5 returned to Newton Stewart after the War.

Two sons of John Laurie and Isabella Stroyan - John S. Laurie and Robert J. Laurie - were part of the 34th Infantry Division arriving in France from Camp Cody, N.M., in October of 1918. Needless to say, the armistice was signed the following month, and so the brothers both came home, along with John and Isabella's grandson, Gilbert Laurie.

It's not the heroic tale of the pipers of Newton Stewart leading troops into battle, but proof of the bravery and willingness to give their lives in service of their country that traveled in their bloodline from Scotland to America.

When we returned to the front desk, Michelle was sitting in a deep pile of red notebooks, with dozens of bright pink sticky notes protruding from the top edge of the pages. She had located Stroyans and then some. 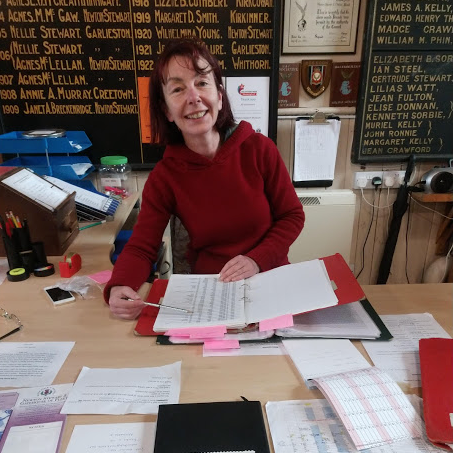 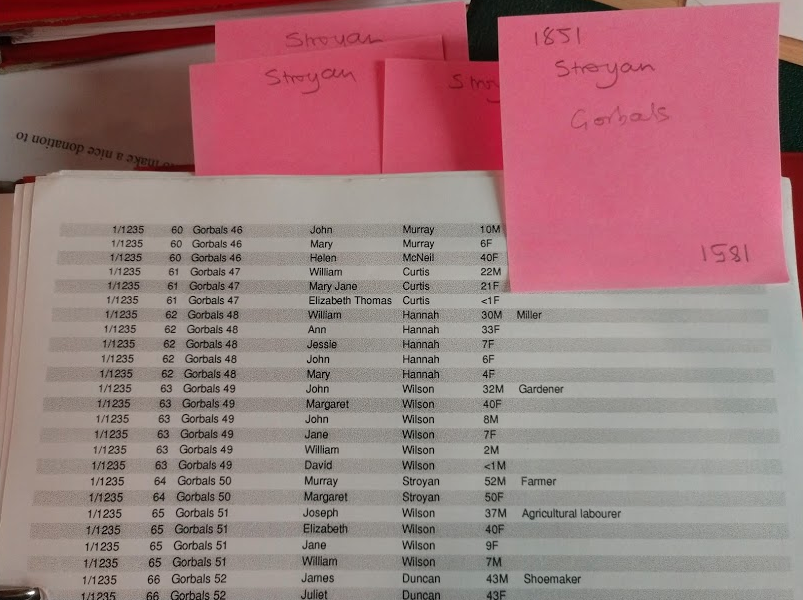 At the time, we hadn’t heard of the Scottish naming conventions, but I took photographs of each page she had marked, and I’m still pouring over them, comparing them with histories gathered by Robin’s father and bound into two large spiral bound books.

That’s why I call Michelle the Tina Larson of Newton Stewart. Because Tina is frequently found pouring over old newspapers, books, and the plethora of other research resources here at the museum to help people who come in, or call in, or write in with questions about their families.

These two wonderful women help tell the stories of their community - the culture and heritage they share with people they bump into at the grocery store, or celebrate Christmas with, or wonder whatever happened to…

Billy was our hero of the day. Without him, we would not have seen the Galloway Forest, or Newton Stewart, or met Michelle and seen The Museum or Wigtown. He was knowledgable, kind, and had a lively sense of humor. He walked through the towns with us, giving us insight on Scottish history and delighting us with a few Scottish sayings in that lovely accent - “six of one and two threes” (six of one, half dozen of another) and “there are no pockets in a shroud” (you can’t take it with you). He even turned around so we could wander in the local cemetery, and got us back in time for dinner!

Robin had the Scotch pie, which she described as bland with just ground beef inside a pastry. We couldn't decide if it was the cook or the dish, but...not a favorite.

I had fish and chips and mushy peas. I've been to the UK a few times, and hands down the mushy peas are my favorite, although the fish is fantastic.

How to Make Mushy Peas:

1. Bring a shallow pot of lightly salted water to a boil over medium-high heat. Add frozen peas, and cook for 3 minutes, or until tender.

2. Drain peas, and transfer to a blender or large food processor. Add cream, butter, salt and pepper to peas, and process until blended, but still thick with small pieces of peas.

In The Tempest, William Shakespeare wrote “The past is prologue.” Many of Shakespeare’s plays begin with beautiful prologues - maybe they all did, and we’ve just lost them. Prologues open the show to help the audience enter the world of the play and better understand the actions and events to come.

Our past is OUR prologue. Knowing the stories of how and why and where we came from, who we came from, what led up to our present experience - this gives us context both for now and for the future.

I know it doesn’t matter if I ever unravel the complicated family tree of Isabella Stroyan, but doing it makes me realize how much more I want to know my own family, the ones that came from Europe to seek a new life and somehow ended up creating me.

Terence Duren - The Art of A Prodigy

A Painter, A Pilot and an Orange Bowl

How to Rock a Year

Eat, Bid and Be Merry!

The Fabric of Dreams