The Lanark Library, a.k.a The Lindsay Institute, is on Hope Street in Lanark Scotland. Just when we were feeling hope-less that we'd ever untangle the mystery of James Waddle's Scottish ancestors... we met Paul Archibald, librarian/historian at the library, who helped us muddle through on the Scottish Naming Convention learning curve, and helped us understand how these conventions can help us look up and down the timeline of a family.

Robin's Notes: Today we were able to take the train (no more buses for us - read that story a few blogs from now) through Glasgow to Lanark and New Lanark. Our plan was to stop in Carluke also, but (we) talked through the stop. The Waddell side of the family was from Carluke and Lanarkshire. Our train conductor seemed surprised that we wanted to stop in Carluke at all, so I'm guessing there is not much noteworthy there to see. There is a cemetery called St. Lukes Churchyard and there may be Waddell graves there. (Watch for the coming blog on Cemeteries, Old and New where we discover the graves of Agnes and Robert Waddell there.)

In Lanark we went to the public library and were helped by a librarian/historian named Paul Archibald. He indicated he did not think he had much to help us, and then spent a good 30 minutes looking in various resources, even taking us into a room behind a locked door to look for old documents (this happens again in Newton Stewart at The Museum in a Church)! Most of the online resources he mentioned we already have, so it was good confirmation we have been scouring the right places.

Paul also filled us in on the Scots' traditional way of naming children - there are RULES. He told us a wonderful anecdote about his own family naming tradition, that this tradition had not been broken since the 1700's until his brother did not name their first son after his father. He told me that there were words exchanged!

Later in this series we will visit New Lanark, an astonishing place just on the outskirts of Lanark, but really that's it's own blog.

Lanark, Scotland, welcomed us at the train station with a nicely old-fashioned map (for which we were very grateful)....

The town is picturesque and friendly. The accents were lovely to our ears, and the smiles that accompanied even lovelier. There were times when we only understood about every third word, but we didn't care. When we get to the blog on Robert Burns, you'll get a chance to hear his poetry in the traditional accent - and I'm pretty sure your ears will smile.

At the bottom of the exit stairs, we were welcomed again in a more modern way - note the Vogue and Bingo signs in the background. Yet these stone buildings are the same ones that James Waddle would have walked past on High Street as a boy. Which was very cool.

Crossing the streets here was an adventure because the cars are on the wrong side of the road. Well, they drive on the right side. But it felt like the wrong side to us! In fact, each person who gave us walking directions that included "Ah, you'll have to cross the street..." and would then look at us impishly before suggesting looking both ways MANY times before crossing. Like the drivers, they were right.

Having navigated safely "across the street (chuckle) and behind the church", we found a very small cafe for lunch.

Robin's Food Review: For lunch I had a vegetarian version of Scotch broth. Barley and root vegetable soup. It was delicious (she later gave me an 8 out of 10 for it - pretty good soup!)

DawnMarie's Food Review: I had ham and cheese on scone, which got a 9 out of 10 from me. Note: in my mind a scone is like a drop-biscuit in texture, these were more like pancakes or soft pita bread - very tasty with the ham (we'd call it Canadian bacon) and cheese with some kind of yummy mustard-mayo. 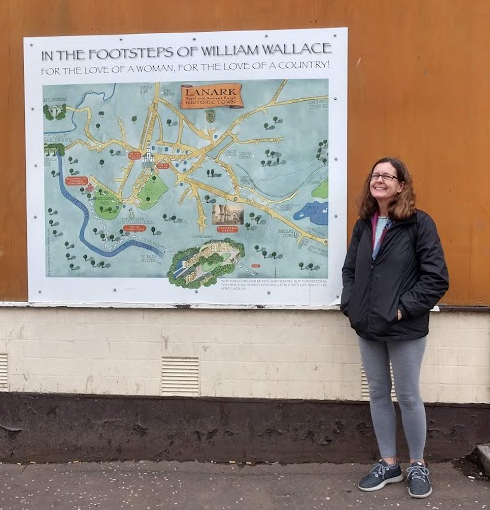 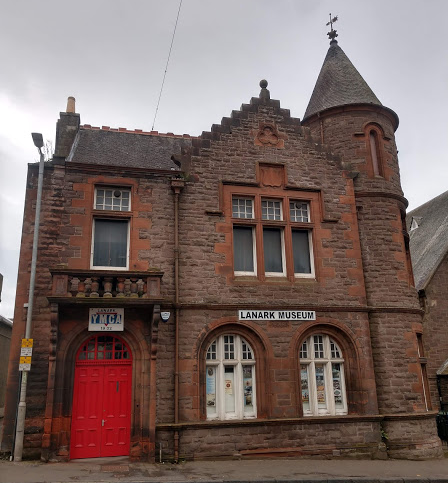 For those of you who don't know, William Wallace is very famous around Scotland. Think Mel Gibson in the movie Braveheart - he's playing William Wallace, who won a big battle against the British that Scots are still extremely grateful for! You'll see him again in Ayr high atop a clock tower.

The Lanark Museum was only open Thursday - Saturday, and we were there on a Monday. Disappointing. But it looked spectacularly interesting - and as I plan to visit New Lanark again someday, I will make a point of choosing the right day of the week to visit - I do love a museum.

Right now, though, we need to get back to those naming conventions or you, dear reader, will have a tough time following these stories - in which appear an endless series of Roberts, James', Johns, Agnes', Marys and Isabella-Isabelle-Belles.

Figuring out the naming conventions is both brain-busting and fascinatingly hard to stop working on. There are a few different patterns - Ancestral, Paternal, Traditional. Within these, there may be variations from family to family, along with a few rebels who stop and then start again following the pattern.

Naming conventions were used for generations until about the mid-19th century...the same time many Scots were deciding to make the move to America. Could it be that the immigrating families felt a new sense of freedom after crossing an ocean to America, and embraced the injection of new names onto the family tree? For a long time, only the noble classes could read or write, so the naming of new generations after old ones told a story of a family's ancestors, their lineage. (In a later blog, we'll visit many Scottish and Nebraskan cemeteries which hold lots of ancestral data, and having the naming conventions at hand can be very useful in a cemetery!)

The relatively sparse information in Old Parish Registers and other historical records can be disappointing. Written by hand, and so sometimes hard to make out, the spelling in the records can differ dramatically. It can also be very confusing when all firstborn children of the same family in a small parish name have their father's father's name or if a child died young, and a later child was named after them - first cousins all need nicknames to tell them apart! Sometimes both the paternal and maternal grandparent would have the same name, so instead of naming two children the same, they skipped to the next line on the protocol - see the second daughter of the Laurie family below.

3rd son named after his father

3rd daughter named after her mother

This is fairly close to the standard naming convention, especially when you realize that John's mother was also named Agnes, hence skipping to naming the 2nd daughter after her own mother.

The James and Mary Brown Waddle family is more difficult.

First off, the spellings Waddle and Waddell are used interchangeably depending on time frame and who is writing it down so looking in old records gets you a lot of possibilities without being able to pin it down 100%.

Then, sadly, James Waddle was orphaned in Scotland at a young age and we were unable to glean any information about his parents, but his first son was named Robert so James' father's name may have been Robert. There are also family records showing that James had brothers, but we did not spend time verifying this. In New Lanark we discovered a possibility, but this remains a grey area in the genealogy.

What we can be pretty sure of is that most of these children were named after Mary Brown's relatives. They seem to have followed the conventions, but picking up only the maternal side. Mary's father, grandfather, and great-grandfather were all named Robert, which just adds to the fun. Where there are question marks, it may have been James' brothers, but we couldn't verify that.

1st son Robert was named after his mother's father

3rd son Earnest James named after ? and his own father.

At day's end, both much smarter than we had been when we awoke, we traveled back to Ayr by train, a ride Robin and I both enjoyed very much. The Scottish trains were comfortable, clean, fast and easy...except for this one day when the beautiful old hotel you see here behind the train fell down and all the trains stopped running.

(More on that later in the blog about why we stopped taking the bus.)

Terence Duren - The Art of A Prodigy

A Painter, A Pilot and an Orange Bowl

How to Rock a Year

Eat, Bid and Be Merry!